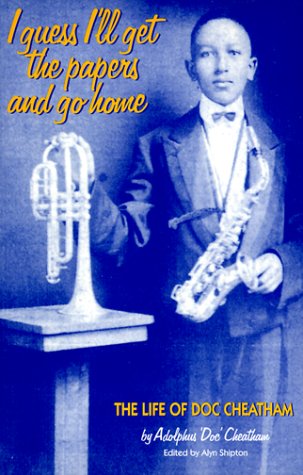 Cab Calloway’s Cotton Club Orchestra was one of the best known bands of the 1930s and Doc Cheatham one of its longest serving members.

In his autobiography, Cheatham, one of jazz’s greatest trumpeters, recalls with clarity and detail his childhood in Nashville, his pioneering attempts to break into the TOBA variety circuit, and his work as a saxophonist in 1920s Chicago – culminating in records with blues queen Ma Rainey. He goes on to recall how he deputised for Louis Armstrong in the 1920s before joining Sam Wooding and travelling to Europe.

In the big band era, Cheatham played with McKinney’s Cotton Pickers and Teddy Wilson’s Orchestra as well as Cab Calloway, and gives a fascinating insider’s view of the life of a black jazz musician in the swing era. Later, Cheatham worked in Latin American bands before revitalising his jazz career in the 1960s to become a much-in-demand soloist, famous for his work with Benny Goodman and Lionel Hampton, as well as with his own Quartet, resident for many years at New York’s Sweet Basil. Alyn Shipton and Doc worked on this for several years after meeting in Switzerland in the late 1980s.