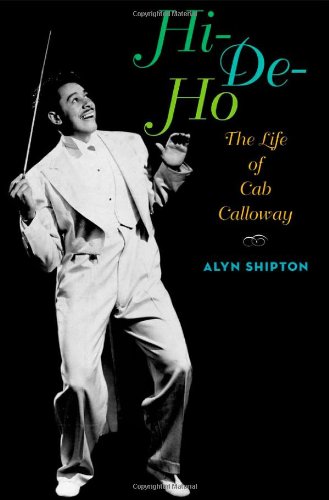 Clad in white tie and tails, dancing and scatting his way through the “Hi-de-ho” chorus of “Minnie the Moocher,” Cab Calloway exuded a sly charm and sophistication that endeared him to legions of fans.

In Hi-de-ho , author Alyn Shipton offers the first full-length biography of Cab Calloway, whose vocal theatrics and flamboyant stage presence made him one of the highest-earning African American bandleaders. Shipton sheds new light on Calloway’s life and career, explaining how he traversed racial and social boundaries to become one of the country’s most beloved entertainers.

Drawing on first-hand accounts from Calloway’s family, friends, and fellow musicians, the book traces the roots of this music icon, from his childhood in Rochester, New York, to his life of hustling on the streets of Baltimore. Shipton highlights how Calloway’s desire to earn money to support his infant daughter prompted his first break into show business, when he joined his sister Blanche in a traveling revue.

Beginning in obscure Baltimore nightclubs and culminating in his replacement of Duke Ellington at New York’s famed Cotton Club, Calloway honed his gifts of scat singing and call-and-response routines. His career as a bandleader was matched by his genius as a talent-spotter, evidenced by his hiring of such jazz luminaries as Ben Webster, Dizzy Gillespie, and Jonah Jones.

As the swing era waned, Calloway reinvented himself as a musical theatre star, appearing as Sportin’ Life in “Porgy and Bess” in the early 1950s; in later years, Calloway cemented his status as a living legend through cameos on “Sesame Street” and his show-stopping appearance in the wildly popular “The Blues Brothers” movie, bringing his trademark “hi-de-ho” refrain to a new generation of audiences.

More than any other source, Hi-de-ho stands as an entertaining, not-to-be-missed portrait of Cab Calloway–one that expertly frames his enduring significance as a pioneering artist and entertainer.