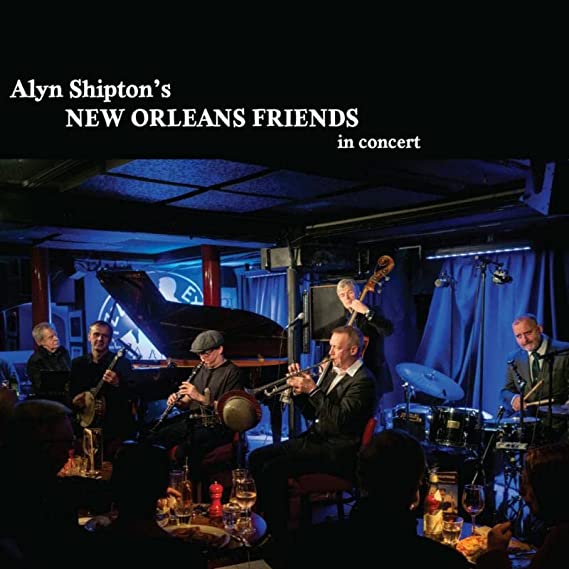 The New Orleans Friends were first convened by drummer Emile Martyn for the Davos/Klosters Sounds Good Festival in 2018. Every member of the band has spent time in New Orleans, learning at first hand from the founding figures of the music. The group aimed to recreate for European audiences the magic its members had discovered in the Crescent City. In 2019, bassist and Radio 3 broadcaster Alyn Shipton got the group back together to commemorate the 65th anniversary of the original Jazz at Vespers concert by the New Orleans clarinetist George Lewis. For this series of UK dates, the Friends were joined by the pianist Richard Simmons, whod played with George Lewis himself on his 1960s UK tours, (along with Emile’s father, the drummer Barry Martyn). Alyn’s band was asked to play at the 2019 EFG London Jazz Festival, and by a quirk of fate this session at the Pizza Express Jazz Club in Soho was almost 42 years to the day when Richard Simmons and Alyn Shipton had recorded at the same venue with New Orleans drummer Freddie Kohlman. The repertoire here comes largely from Jazz at Vespers but featuring the brilliant clarinetist Adrian Cox and his sympathetic interpretation of Lewis’s clarinet style. Whether its a street parade number such as Just A Little While To Stay Here or a New Orleans hymn such as Just a Closer Walk With Thee the band catches the spirit of George Lewis and his Ragtime Band. Many aspects of the Friends playing are missing from other traditional jazz groups, such as a fine control of dynamics, and the two-beats-to-a-bar dance feel, and leisurely tempos of the music. Along with the spirituals, the hymns, and the marches, this CD also includes one of the bands secular staples, Redwing.